I’m reading this month’s pick by our library’s mystery discussion group, Shamed by Linda Castillo, for Book Beginnings on Fridays. 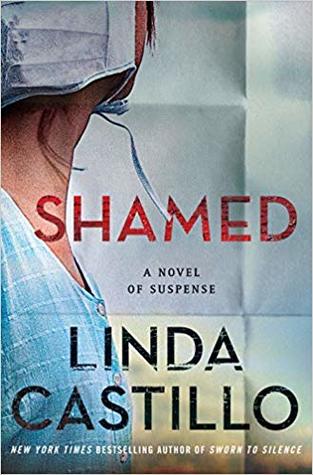 Summary:  The 11th novel in the Kate Burkholder series starts with the murder of an Amish grandmother. Soon Kate earns that the woman’s seven-year-old granddaughter is missing. Kate sets off in a race against time to find the girl, but discovers the family, upstanding and respected members of the Amish community, are not telling her all that they know.

No one went to the old Schattenbaum place anymore. No one had lived there since the flood back in 1969 washed away the crops and swept the outhouse and one of the barns into Painters Creek.

Love how the sense of place is evoked with the names.

You see a lot of things when you’re the chief of police in a small town. Things most other people don’t know about — don’t want to know about — and are probably better off for it.

The prologue is in third person with past tense verbs, which gives it a bit of narrative distance. That’s good because  is about the murder, which is quite gruesome. The rest is mostly told in the first person from the point of view of the protagonist Kate Burkholder and present tense, which feels really immediate. I admire anyone who can write in the present tense. It pulls you in and speeds right along.

The younger man’s eyes dart left and right, as if he’s looking for an escape route in case I attack. He’s just realized where this is going and he doesn’t like it.

When I was looking for the quote, I realized Castillo sprinkles in many words of Deitsch, the language of the Amish.

What do you think? Have you read any books by Linda Castillo?

Summary:  When Detective Renée Ballard, who works the night shift in Hollywood, runs into retired detective Harry Bosch rummaging through department case files she tells him to leave. Curious, she opens the files and discovers he was digging into in an unsolved murder of a teenage runaway.  What she reads about the case hooks her and soon she reluctantly joins Bosch in  the investigation

The patrol officers had left the front door open. They thought they were doing her a favor, airing the place out. But that was a violation of crime scheme protocol regarding evidence containment.

Connelly introduced Renée Ballard as a stand alone character in the novel The Late Show last year.  Now he’s teamed her up with the character of his longest running series, Harry Bosch. I have a feeling sparks are going to fly between the two detectives, but not the romantic kind.

My stepfather introduced me to Michael Connelly. His books stand out as police procedurals because he obviously does his research to keep up with the latest crime fighting techniques.

What do you think? Have you ever read a mystery/police procedural by Michael Connelly?

Today we have the first novel in the Detective Superintendent Roy Grace series, Dead Simple by Peter James.

Blurb:  Four of Michael’s friends take him out for a night of fun before his wedding, but they end up dead and Michael is missing. Detective Superintendent Roy Grace takes the call and starts an investigation, which brings up memories of his own wife who went missing years before and who has never been found. Will he be able to find this young man?

A Series of Disappointments

Setting:  I had high hopes for this series because I read it was set in Brighton, UK. I have visited Brighton and enjoyed my time there, so I was excited to read more about it. Unfortunately, other than the barest of mentions of locations like

Dead Simple could have been set anywhere, which was disappointing.

Tension:  Next, Peter James does a great job of creating excruciating tension in the beginning. The victim, Michael, is put in a bad situation and the clock is ticking. The reader wants him to be found as soon as possible,

Rather than putting long hours into the case, however, which you would expect given his experience with his wife, Roy Grace wanders off to a poker game.  Life goes on and on. He even takes his goddaughter out for her weekly jaunt.

It isn’t unusual for authors to write in quiet moments between tense scenes. Perhaps James was trying to make his protagonist seem like a regular guy. In any case, Roy Grace’s part in the story didn’t work for me. It seemed like the villains were the only ones who accomplished anything.

Solving the Mystery:  Okay, Roy Grace is a superintendent, so he’s going to put some clues together and find out what’s going on, right? Except, the author doesn’t even have that happen. Someone else steps up and wraps things up for Roy (I won’t give details, but let’s say the ending is foreshadowed toward the beginning.)

What Works in Dead Simple?

Given all the disappointments, you might wonder why this book is so popular. My guess is the plot. The beginning set up with Michael is so good that the tension in his plot thread keeps the reader reading regardless of the low key police detective. The plot also has some good twists, again all in Michael’s part of the story.

The bottom line is that the victim is the only part of the book I cared about. I might pick up a later book in the series to see if things improve.