#BestsellerCode100: Writer’s Review of In the Woods by Tana French

Let’s take a look at the next novel from The Bestseller Code 100 list, In The Woods by Tana French, from a writer’s perspective.

In The Woods* by Tana French

Summary:  Twenty years before, three young children disappeared into the woods that surrounded their Dublin neighborhood. Only one survived, and he can’t say what happened. Now he’s a police detective faced with investigating the murder of a young girl in the same woods.

This award-winning novel is the first in a series of six featuring the Dublin Murder Squad.

Author Tana French’s characters are well-drawn and complex. The first person narrator is Detective Rob Ryan (the one who survived the earlier event).  He reveals on the second page of Chapter 1 that he might be an unreliable narrator when he says,  “And I lie.”

His partner is Detective Cassie Maddox, a young woman who also might have some personal demons.

The two detectives have been partners for a couple of years before the story starts. Their bantering, close relationship is the best part of the book.

“Behave yourself,” I said, pulling her hood over her face.
“Help! I’m being oppressed!” she yelled through it. “Call the Equality Commission.” The stroller girl gave us a sour look.
“You’re overexcited,” I told Cassie. “Calm down or I’ll take you home with no ice cream.”

The main setting is a patch of woods near a small neighborhood in Dublin. Rather that being just a simple backdrop, the mood of the woods changes with situations throughout the story: 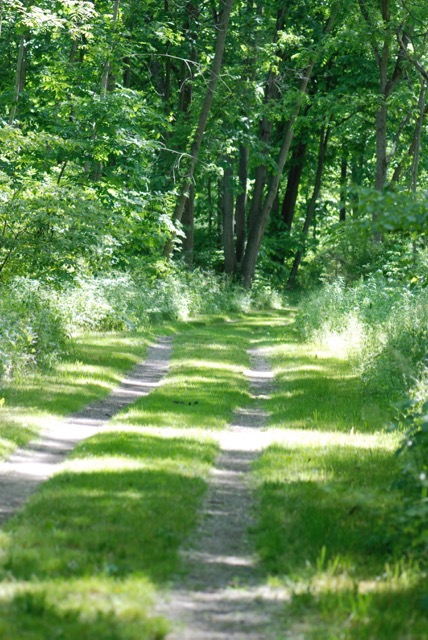 The wood is all flicker and murmur and illusion. Its silence is a pointillist conspiracy of a million tiny noises — rustles, flurries, nameless truncated shrieks; its emptiness teams with secret life, scurrying just beyond the corner of your eye.

I recently attended a workshop where the presenter suggested deconstructing eight key components of plot in a novel as a way to learn the craft. Let’s see how it goes.

1. The hook – The purpose of the hook is to grab and hold the reader’s interest. Because most readers decide whether or not to continue on with a book after reading the first few paragraphs to first few pages, it is important to make the beginning sentences really count.

I already discussed the beginning of the book in an earlier post, but to summarize, in the prologue the author does a good job of making the reader wonder what’s going on with the kids and want to read more to find out.

2. The set up – This is where the author introduces the characters, reveals details of their world, and presents the problem that is central to the story.

The character and setting introductions work well. Readers are drawn to Rob and Cassie. They have a cool relationship.

The story problem is multi-layered, which adds complexity. The main problem is to figure out who killed twelve-year-old Katy.  Underlying that problem is what happened to the three young children twenty years prior and is it related to Katy’s death?

3. The obstacles – For a successful story, the characters need to overcome hurtles and learn from their mistakes. Sometimes the obstacle is simply moving down the wrong path or following a red herring. There are several red herrings in this story, including mysterious strangers.

The biggest obstacle which hinders the investigation is Rob’s past experiences.  His emotions roil as memories surface.  For example, he messes up in court when he is supposed to give evidence for another case.

4. The side story – This is a subplot that is not directly involved in solving the problem, but that adds a sense of realism and depth.

The side story is easy to spot in this novel. There is also a side character, another detective named Sam O’Neill. His part of the investigation is to figure out whether Katy’s death was politically motivated due to conflict over a proposed road construction project. Personally, I found the side story to be rather flat, although perhaps that’s what the author intended.

5. This Changes Everything! – Toward the middle of most novels there’s a time when the rug is pulled out from under the hero. Something occurs or is discovered that defies the reader’s expectations and wakes him or her up.

This component wasn’t as clear (or handled in such a straightforward way). Right about the middle (roughly page 210 in this 429 page book), Rob remembers witnessing a rape in the woods as a child. It doesn’t change things drastically, but he and Cassie pursue it.

The biggest shake up comes near the end/climax when Rob’s boss finds out Rob was involved in the earlier case. That really does change everything.

6. The escalation – The section that is push to the climax of the story. Often the pacing becomes more intense, and the ratio of dialogue to narration shifts to more dialogue.

The pace does pick up as the detectives hone in on the killer.

7. The climax– When everything comes together and the reader finds out who did it.

This is where In the Woods really departs from the norm. Instead of a satisfying resolution, suddenly Rob’s life is turned on its head. His boss finds out about his past, he sleeps with Cassie and then withdraws from her which destroys their partnership, and the person who instigates the murder turns the tables on them and gets way with everything. Instead of everything coming together, everything falls apart.

In the “first ending”, we do learn who kills Katy, which is the solution to the primary problem. The fact that the instigator escapes is not satisfying, but it works.

On the other hand, almost nothing is revealed about the earlier disappearances. If anything, things are murkier. In this tacked on “second ending” Rob wanders around, his life in shambles.

If this novel was a stand alone, the first ending would have been sufficient. As part of a series, however, the less satisfying “second ending” makes sense. The author is probably setting things up for the next novel. It is possible that solution to the older mystery isn’t revealed until much later in the series, if at all.

What did you think of the plot deconstruction? Did it enlighten, or was hard to follow?

I learned a few things about my expectations as a reader and how I would approach things as a writer.

For the most part, I enjoyed this novel, but I did have one issue with the story line (besides the unsatisfactory ending). In contrast to Rob who is up front that he lies, Cassie does not lie unless forced to do so by her job. This character trait made it less believable that she would go along with Rob when he hides his involvement in the earlier crime from his boss. Even with her close relationship with Rob, it didn’t ring true that she would allow him to blatantly jeopardize both the case and their careers. Of course, as the main character Rob needed to be involved in the mystery for it to work, but it would have been more realistic — and have added another layer of conflict — if Cassie had revealed Rob’s past connection to her boss right away and Rob had had to fight to be included at every step of the investigation.

According to Book Riot, reading In the Woods isn’t the best way to start the series. largely because of the problems I mentioned with the ending. Jessica Woodbury suggests starting with the fourth book in the series, Broken Harbor, because of how the characters reoccur. I’ll have to keep that in mind.