When you’re reading a book as a writer rather than as a reader you tend to focus on the craft. For example, you may notice how the author handles dialogue, how he handles the scenes, or how he develops characters. This perspective can be like studying how magicians do their tricks, so be prepared for a glimpse at what goes on behind the curtain.

In the book we are using for our reading challenge, The Bestseller Code, Jodie Archer and Matthew L. Jockers discuss theme, plot, style, and character. To add more depth, for my analysis I chose to apply the categories from the Six Core Competencies of Successful Storytelling from Writer’s Digest instead.

(Note:  If you are unfamiliar with the vocabulary I’m using below, the Helping Writers Become Authors website has a clear, concise summary of the character archetypes.)

On the surface the characters seem to follow the standard archetypes. The protagonist (main character) is U. S. Marshal Teddy Daniels, a likeable, but flawed man. He is filled with angst over the death of his wife Dolores, whom he loved deeply. Dolores could be best defined as the impact character, although ironically the woman the marshals are looking for, Rachel Solando, also fills that role.  His new partner, U.S. Marshal Chuck Aule, is the affable sidekick. The antagonist is played by Dr. Joseph Cawley, who is in charge of the facility for the criminally insane on Shutter Island. At the end of the book, however, the characters get thrown into a blender and it becomes less clear who is serving which role. For example, is Chuck Teddy’s sidekick or Dr. Cawley’s sidekick?

Dialogue
One way for a writer to establish character is through dialogue. Dennis Lehane is a master of dialogue. He excels at making each character sound unique. (Note:  at times he uses some pretty raw profanity to achieve this. Do you think this helped or hindered character development?)

Some ways to make dialogue authentic — more like real speech — include using contractions, sentence fragments, vocalized pauses (like “um”), and mixing up the length of the lines. Lehane does it all, plus he’s such a pro that he flies through dialogue without using a single “he said.”

(Teddy:) “You guys do that a lot?”
(Cawley:) “What’s that, Marshal?
“Sit around over drinks, and, um, probe people?”
“Occupational hazard, I guess. How many psychiatrists does it take to screw in a lightbulb?”
“I don’t know. How many?”
“Eight.”
“Why?”
“Oh, stop overanalyzing it.”

Because the title of the novel is a place, it’s reasonable to expect the setting to be important. In fact, the first paragraph of the prologue sets the stage. It is all about the island.

I haven’t laid eyes on the island in several years. The last time was from a friend’s boat that ventured into the outer harbor, and I could see it off in the distance, past the inner ring, shrouded in the summer haze, a careless smudge of paint against the sky.

Lehane’s descriptions of the setting are visceral.

The theme of a novel is the part that applies to the real world or what the novel means. You can describe the theme as the questions asked or lessons learned.

In Shutter Island, one of the chief themes is mental health. How fragile is the human psyche? Parallel to that theme is how love/marriage can be a minefield.

Another strong theme in the novel is that water is a dangerous force of nature. In one scene early in the book, young Teddy gets motion sickness when he’s out in his father’s boat, but all isn’t as it seems.

“…Teddy unable to tell his father that it wasn’t motion that had turned his stomach.
It was all that water. Stretched out around them until it was all that was left of the world. How Teddy believed that it could swallow the sky. “

Soon afterwards his father dies at sea. Water turns up again and again at crisis points in the story.

Topic
The Bestseller Code examines novels using topics rather than themes, probably because it is easier to define using a computer model. What is the difference between a theme and topic? A topic might be “dogs,” whereas the theme of a novel might be “dogs are loyal friends.”

The authors found that a writer who devotes up to a third of his or her book to only one or two topics is the most successful. It does make sense that too many topics might confuse and misdirect a reader. Lehane did a good job because he stuck to a few intense topics developed as themes.

Structure is the order of storytelling. In this case, the prologue starts in 1993. The first chapter bounces back to 1954 and the main story progresses more or less chronologically through a period of a few days, with short flashbacks to Teddy’s relationship with his wife Dolores.

In a famous essay by Elmore Leonard in the New York Times, he states a writer should avoid having prologues because they are annoying. In Shutter Island, the prologue is critical to understanding what comes after, but it’s so different in tone from the rest of the book that readers might be tempted to skip it.

Did you read the prologue? What is your opinion of prologues?

Whether or not you enjoyed the book as a reader, from a writer’s perspective Dennis Lehane did an excellent job crafting Shutter Island. A beginning writer could learn a lot from critically studying his work. 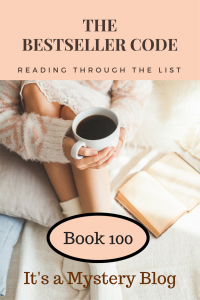 Currently we are hosting a challenge to read through the list of 100 best of the bestsellers recommended in The Bestseller Code by Jodie Archer and Matthew L. Jockers. Shutter Island is number 100 on the list, and we started discussing it on November 7, 2016. Please feel free to join the conversation.