#BestsellerCode100: Primary Colors by Joe Klein From A Writer’s Perspective

As part of our ongoing challenge to read through The Bestseller Code 100, let’s take a look at  Primary Colors by Joe Klein from a writer’s perspective. (Discussion is rounded-up here.)

Primary Colors is a roman à clef, a book about real people who have been fictionalized and disguised. Drawing on his background as a journalist for twenty-five years, Joe Klein reveals the inner workings of a political campaign during the early 1990s when television predominated and the Internet hadn’t taken off yet. It is loosely based on former President Bill Clinton’s first campaign. As a political novel, Primary Colors falls in the genre fiction category.

Although this is a roman à clef, it is still possible to define a few archetypes. Henry Burton, former congressional aide, is the first person narrator and sidekick to protagonist Jack Stanton, a governor of a small Southern state who is running for president. Daisy Green, a media consultant, becomes Henry’s love interest. There isn’t a clear antagonist.

From the first page, Klein feeds the reader a steady stream of characters:  Howard Ferguson III, Arlen Sporken, Orlando Ozio, Luther Charles, Uncle Charlie, Susan Stanton, Mitch the driver…  It was a gush of names. In fact, it was so hard to keep everyone straight that I started keeping a running list. Even though I only counted names that reoccurred and gave up about two thirds the way through the book, I still had forty-two names.

A number of the characters made only a single appearance and only a few are developed into more than cardboard silhouettes. In most novels this would be a flaw, yet in Primary Colors this flood of names works. Politicians and journalists meet an awful lot of people, and Klein gives us a sense of what that might be like to be constantly bombarded with names.

If you would like to start a list of your own, Shan (one of our fellow reader/writers) found a shorter list of the “primary” characters and their potential real-life counterparts on Wikipedia.

Obviously, the computer algorithm that chose these novels is not offended by profanity. When reading, I tend to skip right over expletives. It wasn’t until I started looking for a snippet of dialogue as an example did I begin to realize how often the f-word appears in this text.

Overall, the dialogue sounds authentic. It is sprinkled with contractions and sentence fragments.

Klein does a good job of interspersing long stretches of dialogue with shorter pieces. 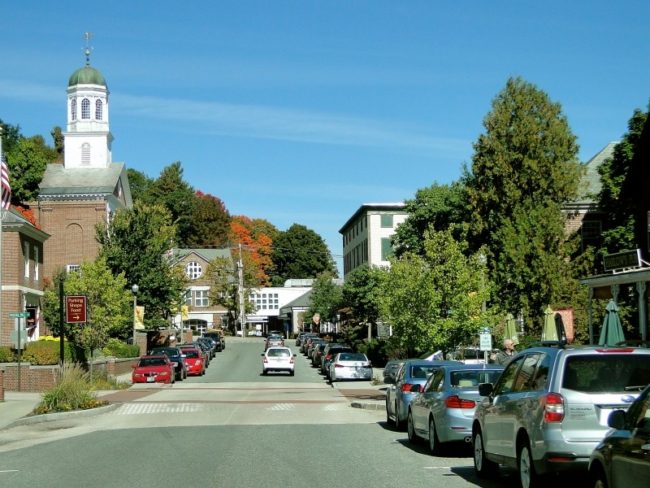 Public Domain Photo of New Hampshire via Dustytoes via VisualHunt

The setting in this novel takes the back seat to the characters. Much of the action takes place in New Hampshire in the months leading up to the primary. At one point the candidate travels to Los Angeles. Paradoxically he finds a chilly reception in warm, sunny LA and a warm reception when he returns to cold New Hampshire.

The Stantons come from Mammoth Falls, which I assume is fictional since the “Southern state” is never named. There is Mammoth Springs  in Arkansas.

Because this is genre fiction, we would expect the themes would not be as strong as in literary fiction (like State of Wonder), and that is the case.  The main theme seems to be that politicians have flaws just like everyone else. As Klein says in the Afterward:

Discussions of race also pop up throughout.

If you are interested in writing, you should find a later edition copy of the novel with the Afterward included. In it Klein gives a glimpse into his writing process. He discusses what it was like to write a novel after having worked as a journalist, saying journalism was hard and fiction was fun. As other novelists have found,  he revealed characters would simply show up on the page and refuse to do what he expected. He also talks about why he chose to publish anonymously and some of the consequences of having done that.

One paragraph on page 375 in the Afterward is curiously prophetic.

And now it is — suddenly, ridiculously — ten years later. I miss the characters I created in Primary Colors and, from time to time, I think about taking another run at them… although I’m pretty sure that a Susan Stanton campaign for the presidency wouldn’t be nearly as much fun as Jack’s.

This is only the third novel from The Bestseller Code list, but it is already apparent each is unique. Primary Colors could not be more different from State of Wonder.  Why did the computer algorithm pick these books? Do you see any patterns yet?