Analysis of the First 25 Bestsellers from the #BestsellerCode100 Challenge

Can you believe we have been reading novels for The Bestseller Code 100 Challenge for nearly a year now? We started our first book on November 7, 2016 and we have read 25 bestselling novels so far.

The Bestseller Code by Jodie Archer and Matthew L. Jockers

Let’s take a look at a few summary statistics for the first twenty-five books. This analysis was prepared by both Karen and Roberta.

It will be interesting to see how this ratio changes as we read more of the list. 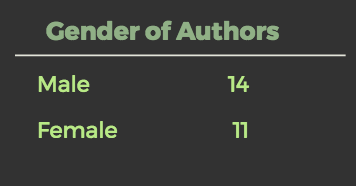 Conversely, only 2 authors wrote main characters of the opposite gender:

Can we conclude that authors prefer to write main characters that match their own gender, writing what they know?  It will be interesting to track this statistic as we read through the remainder of the list.

One might expect that more experienced authors would be more likely to write a bestseller.  Thus, a majority of the titles on the list should come from authors who have published more than five novels. Surprisingly, six of the twenty-five novels were the author’s first or debut novel. Nine were from authors who had published only two to five novels. Once again, J.K. Rowling’s The Cuckoo’s Calling is problematic. We counted her as an experienced author, even though Robert Galbraith was supposedly a debut author. Also, Stieg Larson’s book was the third of a trilogy, but it was written before he published the first. We included him in the “few” category.

Apparently experience is not a primary factor, at least so far. If it were, we’d expect that a vast majority of the books would be by authors with more than five novels. 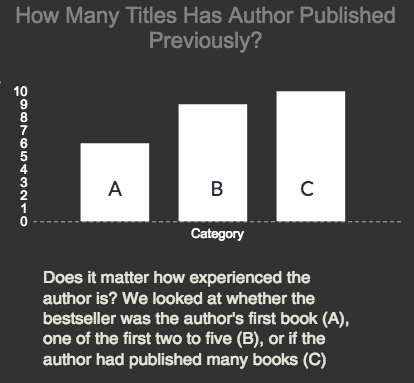 Assigning a novel to a genre is becoming more and more tricky as many novels cross boundaries. We considered four of the titles to be literary fiction. Of the titles that fit the genre category, eight of the titles could be considered to be mystery/suspense/thriller, making it the most popular genre so far. 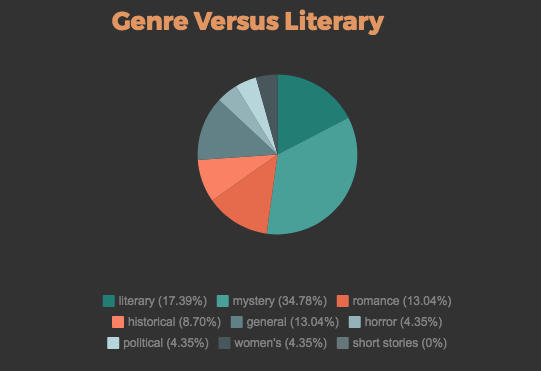 Do bestselling authors all have a degree in English or creative writing? Although most of the authors had degrees in the liberal arts side of the college, not all studied writing. In fact, five of the twenty-five had degrees in writing, plus another four with degrees or careers in journalism. That is roughly 36%.

Surprisingly, 12% studied law, and another 12% were actors or filmmakers before taking up writing novels. Of those with no background in the arts, one was a doctor, one had psychology training, and one worked as a flight attendant. 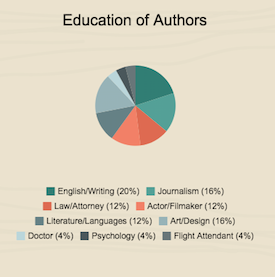 Because the bestsellers were from The New York Times list, it is not surprising that the vast majority (76%) of the authors were Americans. 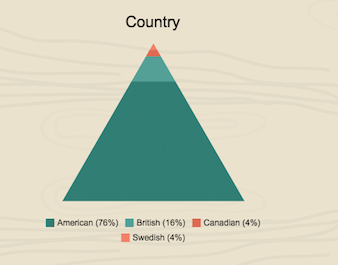 After having read the 25 bestselling novels for this challenge, we need to ask ourselves if it has been worthwhile. Here are some of our insights.

At the beginning we expected that we would enjoy reading most of the books because they are popular bestsellers. We are both book lovers and readers, so it seemed to be a reasonable expectation. We were both surprised to learn how many of the books we did not enjoy. Although our tastes are similar, we have not always agreed on how well we liked a certain novel, either. We learned that there is more to enjoying a bestseller than simply good writing or an interesting plot, and that humans need stories that resonate with us as individuals. We found out that being able to reach a broad audience in a meaningful way is quite an art.

Although we have had to hold our noses and keep reading at times, by persevering we have learned more about literature and writing. We have been exposed to a diversity of formats and styles. We’ve read epistolary novels, bestiaries, and novels written from the perspective of a dog. We’ve also become a bit more literary. Now when someone mentions World War Z in a conversation, we can give an informed opinion, and not from watching the movie.

We’ve also stepped out of our comfort zones, reading novels in genres we don’t usually consider when looking for something to read.  The Girl Who Kicked The Hornet’s Nest was a far cry from Karen’s first love, historical fiction, yet she was enthralled with the characters and quickly read the entire trilogy.  And The Mountains Echoed was definitely not a detective novel or murder mystery, but Roberta found it breathtaking.  By reading books in genres outside of our norm, we’ve both discovered some new favorite authors.

What about you? What nuggets have you discovered from reading The Bestseller Code 100 list?

All in all, we are looking forward to discovering the next twenty-five bestsellers. We hope you decide to read them with us.