Let’s take a look at The White Tiger by Aravind Adiga from a writer’s perspective.

The White Tiger by Aravind Adiga

Summary:  Balram Halwai writes about his rags to riches story as he leaves behind his impoverished Indian village to establish his own taxi business.

Note:  Although Aravind Adiga was only 33 when he published this debut novel, it won the Man Booker Prize in 2008.

This novel is an excellent example of picaresque fiction.

A picaresque novel features a main character who is from a low social class and a bit of a rogue (the name comes from the Spanish word picaro for rogue or rascal). He gets by with his wits and often skirts the law or social conventions to achieve his goals. This novel follows the picaresque tradition because it is told in first person, and features plain, realistic language with elements of satire and dark comedy.

The White Tiger is also an epistolary novel. The text is a long letter written by the main character over a series of evenings.

Balram Halwai is the roguish main character. He grew up in a poor rural village in India. Using his cunning, he learns to drive and becomes a driver/servant for Mr. Ashok and his wife, Pinky Madam in Delhi. Although at first he follows the law, he doesn’t mind breaking with social conventions. For example, he refuses to send a portion of his wages back to his family as expected. Later we learn he is willing to break the law, too.

One feature of a picaresque novel is that the main character doesn’t have much of a character arc. Once a rogue, always a rogue. In this case Halwai’s circumstances change, but he still bends the rules as he sees fit.

Because it is written from Halwai’s perspective, women are kept in the background. Other than his employer’s wife, whom he calls Pinky Madam, the majority of female characters are either family members (who Halwai sees as impeding his progress), or prostitutes. Pinky Madam ends up leaving her husband and thus disappears from the story as well.

Setting is incredibly important in this novel. Each place Halawi lives in reflects a change in his social status. In general, he moves in a southerly direction, from the village of Laxmangarh in north India, to Delhi in the middle, and finally Bangalore in the south.

To Halwai, the rural village of his birth represents the “Darkness” of hopelessness, poverty, illness, and death. Delhi becomes a place of both “Darkness” and “Light,” as he learns about and tries out new roles. He ends up in Bangalore, where he starts a business and becomes one of the exploiters rather than one of the exploited.  He sees himself as someone “in the Light.” 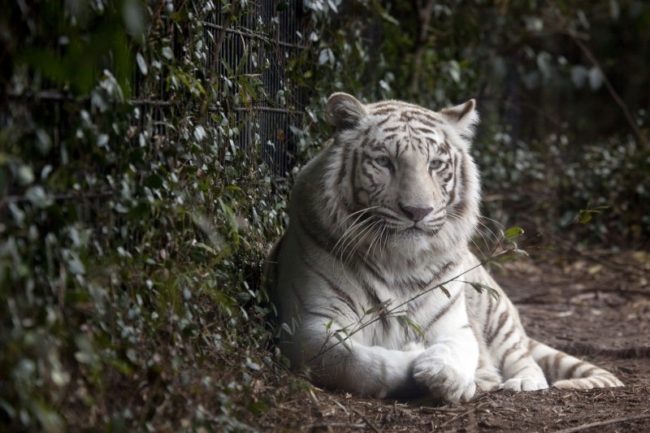 From the white tiger of the title to the Black Fort above his village, the story is full of symbols. Many are prominent during turning points in the main character’s life.

Near the village where Halwai grew up, there is a structure called the “Black Fort.” As a child he is drawn to it, but is also frightened of it. His mother had been fascinated by it as well,  prior to her death. Once he has the driving job,  Halwai is finally  brave enough to climb into the fort. Looking down upon his village he experiences a step out of the “Darkness.”

Halwai often refers to people as animals. In the beginning, those that exploit the villagers are given animals names. The Stork controls the river, the Wild Boar takes taxes for the agricultural lands, the Raven harasses the goatherds, and the Buffalo extorts those who used the roads (Halwai also resents the water buffalo which provided milk and income for his family).  He calls Mr. Ashok’s brother “Mongoose.”

In Delhi, Halwai calls the other working people the “Rooster Coop” because they fight with one another rather than helping each other out. Like roosters, they peck others to keep them in their place. Halwai refuses to participate and distances himself from them.

Throughout the book, Halwai envisions himself as a white tiger, which represents a rare sort of animal. When he sees a white tiger in a cage at the zoo, he decides he must break free of his life of servitude.

Although clever in its construction, this novel leaves me flat.

The first problem is the lack of a character arc. When his circumstances change, Halwai doesn’t become a better person. Instead he becomes slicker and better at manipulating others. You want to root for him, but he is not likeable. Rarely do I want to rewrite a novel, but in this case I wish the main character had simply found a clever way to steal the money. Not as brutal an impact, but perhaps more reasonable for a human being who up to that point seemed like he obeyed the law?

The epistolary format also doesn’t help. Writing the story as a letter in the first person limits how much the reader can see of a character’s world. For example, when he and his brother take their dying father to a hospital and there’s no doctor (because of corruption), we don’t get a clear picture of the emotional impact this has before Halwai is off onto another topic.

Although it is probably peevish on my part, including dialogue in the text that is supposed to be a letter seems jarring and artificial. Who writes dialogue in a letter, even a fake one? Yes, it wouldn’t have worked any other way, but it still annoyed me.

For many, The White Tiger has been highly acclaimed. People have applauded its originality and fresh voice, as well as its setting. It is fast paced and filled with dark humor.  In a lot of ways this novel is as rare as the animal in the title.

Have you read The White Tiger by Aravind Adiga? We’d love to hear your thoughts.