If you’ve been preparing for NaNoWriMo (National Novel Writing Month) with us, time to consider scenes.

What is a scene?

As a reader, you probably already know what a scene is instinctively.  As a writer, however, it pays to have the nuances clear in your mind.

A scene is often defined as the basic building block of plot. What does that mean exactly? Envision a scene as a mini-novel. It has a beginning, a middle, and an end, during which a action/incident/reaction occurs that moves the entire plot forward. In addition, there’s generally a concrete setting, point of view, and cast of characters. When one or all of those things change, the story is moving to a new scene.

Scenes can be fluid and different authors handle them in different ways, but they often follow a general template:

Make sure the setting, the characters, and point of view are all clear right up front. As a reader, I have read a few multiple point of view (POV ) novels where it took a long time to figure out which character was narrating a particular scene. If I have to skim ahead or look back to figure out whose voice I’m hearing, it takes me out of the flow. If I have to do that more than once, I’m likely to go find another novel to read.

With a little crafting, you don’t have to be obvious to show who is narrating. Make sure each character has a unique enough voice and circumstances to stand out once you have dropped a few clues. Also, be sure to introduce any new characters in the scene clearly and precisely. Make them easy to remember with a few carefully-chosen descriptive details.

All in all, make sure the character(s) have something they want to happen. Do they want to get a job, find a clue, or have dinner with their mother? What is their objective or goal?

Here’s where the character runs into trouble. Some sort of obstacle gets in their way, making it difficult to achieve their objective. A crisis becomes a bigger crisis, which causes reaction or change. The change might be something like they discover or learn how to use a tool that allows them to progress against a bigger problem coming up later. On the other hand, it might be an argument between boyfriend and girlfriend that drives them apart.

The author has the most flexibility with the ending. Generally, the scene ends when something changes, like the characters split up, the setting changes, or the action jumps to the next day (time changes), etc. The story is moving on. You can wrap up things and set up the next scene, or you can leave on a cliff hanger, with a question that will be answered at a later time.

No matter which ending you chose, try to end on your strongest line. Hook your reader to turn the page and keep reading.

A typical scene is 750 to 2,500 words, but you control the length of your scenes.  Some authors suggest that shorter scenes make the pacing quicker. Others suggest that shorter scenes work better for readers using electronic devices. If your scenes average longer, don’t worry about it. Some readers prefer a slower pace. You can also mix up the length from scene to scene. Your voice and style is your own.

Another way to individualize your scenes is by controlling the amount of action, description, dialogue, thoughts and feelings you include. One scene might be largely action, the next heavy with dialogue. Keep in mind what is appropriate for what is happening overall. If you are at a climax in your story, action is probably going to work better than long pages of mostly dialogue.

Hopefully, you have a clearer understanding of what a scene is and how you write one.

Exercise:  Go to a scene you have written in the past and analyze it for the components we discussed. Do you have a clear beginning, middle, and end? How did you handle the ending? How much description did you include? How many lines are devoted to action or to dialogue? Did your characters reflect on what happened and formulate a new plan or did they move on?

Now that you have studied it, would you change anything?

Tip:  Analyze a scene or two from your favorite novel for the same components. 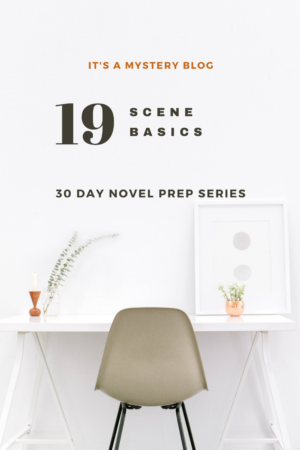